Star Chalice Sisters Publishing is happy to bring you inspirational tools for empowerment and illumination, assisting you in gaining greater spiritual insights, wisdom and ways to live your life in joyful balance in a world full of change.

We are an independent publisher of books, as well as tarot and oracle decks for the body, mind, and spirit.

Katherine Skaggs is the visionary artist and the other original co-founder of Star Chalice Sisters Publishing. As creative Goddess of many skills, Katherine has been head artist, designer, art director and CEO from the beginning. Katherine’s art blesses every project, not only as beautiful imagery, but as portals to the Divine. Katherine acts as intentional channel to bring the energy and essence of each Goddess or Divine Being of Light to life through imagery and message for others to engage and experience.

Katherine continues to birth new projects as artist and author, with Masters of Light Wisdom Oracle as next creation to birth. Additional projects include extended learning with the Mythical Goddess Tarot through new books and online coursework. Learn more about Online Courses.

Katherine is also well known for her intuitive, channeling of Soul Portraits, Spirit Guide Paintings and other Divine Beings of Light; as well as her expertise as a Shamanic Healing Practitioner and ceremonialist, and Intuitive Tarot Reader and channel. 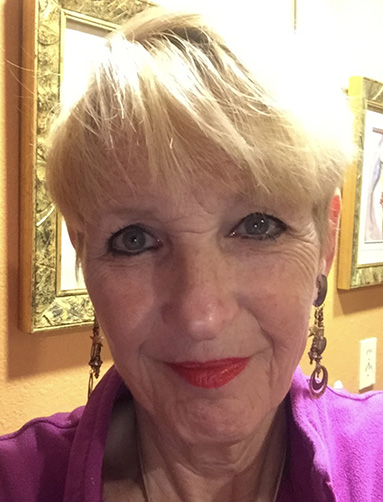 THE BACKSTORY – IT ALL STARTED WHEN…

Sage Holloway and Katherine Skaggs met in 1991 (this life.)

It is a funny story how we met. Sage came into my metaphysical store, DreamWeaver, in 1991. DreamWeaver was a tiny, 500 square foot metaphysical store in Fort Collins, Colorado that I was the owner, and primary employee, it was so small. It was filled with crystals (mostly quartz), tarot decks, metaphysical books, some jewelry and everything metaphysical. When Sage walked in she looked around to access the place, knowing she was coming in to sell me some water fountains she hand made, if all looked right. As she looked her eyes rose in wonder, and perhaps a little curiosity. She asked me, “Where are all your black stones?” with a bit of a sly grin on her face. I pointed to a few smoky quartz, wondering what she was looking for, asking “What do you need or want?” She dryly said, “Honey, if you don’t get some black stones in here you are going to just fly away!”

That was when I knew i would become fast friends with this woman! Over the next months I purchased and sold Sage’s water fountains, and took some time to get to know her and become friends. I found out she was an amazing intuitive and tarot reader. When she saw some of my artwork (very different from today), she let me know that she had been reading tarot since she was 14, and by the time she was 17 she knew she had to create a Divine Feminine tarot deck. And with that she told me she thought I was the artist! I said something along the lines of, “Oh, great!”

We went along with our lives for another ten years, busy with a variety of experiences, and then lost touch as Sage took off on adventures across the US, and I myself had my own. We ran into each other again in 2003, happy to see one another. One of the first things Sage said to me was, “We have to do that tarot deck!!” I of course said yes, yet time continued without our effort to actually creating the deck. It was almost time.

Three more years passed, and I was indeed painting goddesses during those years. Mother Mary and the Madonna and Child were a theme for me. This led me to my dear Lydia Ruyle, a wise mystic, Goddess knower, teacher and artisan. In 2006 I went to Rome with Lydia and Meinrad Craighead, another mystic, Divine Feminine artisan, to see Rome through the eyes of the Goddess, pre-Christian, pre-Patriarchy. It changed my life and opened my eyes and heart to knowing it was time to “Tell Her-Story.”

I came home and called Sage, and told her I had finally gotten the memo. “Let’s do this thing!” And we did.

I put the entire project into form from painting and words to a book and card deck ready to print, as I had a background and expertise in publishing and graphic design. Then we pitched the cards to several publishers, only to get “almost” picked up by US Games. With excitement to get this deck out into the world, I pulled up my big girl panties and did what seemed right and became the publisher of the deck. Then and there Sage and I visioned Star Chalice Sisters Publishing, where we launched altar cards with the goddess imagery and Sage’s inspirational writing, the Mythical Goddess Tarot, and then the Pocket-full of Goddesses Blessing Oracle.

Today Star Chalice Sisters is now the publisher of Sage’s first book Animal Healing and Vibrational Medicine, obtained from Blue Dolphin Publishing at the end of 2017. We are also the publisher of the original Pocket Blessing Cards, the Pocket-full of Goddesses Blessing Oracle, and more than 65 altar cards born of my art, with both inspirational writing and invocation by Sage and myself. I am now in the process of creating a new deck, Masters of Light Wisdom Oracle, as well as other writings inspired by the Mythical Goddess Tarot, and Sage Holloway.

I hope you enjoy what Star Chalice Sisters Publishing offers you for your enjoyment and enlightenment. Our projects are those born of the heart and soul, aimed at creating a more beautiful, awake world full of inspired souls.