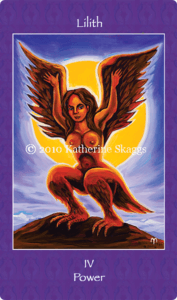 The ancient Sumerian Goddess Lilith of sexual power was chosen for the Mythical Goddess Tarot by author Sage Holloway, and artist Katherine Skaggs, to represent the Divine Feminine essence of Power. As part of the major arcana, Lilith invites us to fly free from the shackles of our physical world and man’s patriarchal laws, to embrace our full unbridled power and essence of expression. She challenges us to move beyond patriarchal power and convention, to honor our heart’s desires and true nature as Divine. She asks you to be loyal to your own inner passion and make no compromise to your authentic self. Her wisdom and power challenge all that we know of our culture, yet lead us into the re-emergence of the Goddess ways of joy, pleasure and love as the core guiding wisdom.

Lilith’s recorded history begins with the legend of Inanna, who is the granddaughter of Ninlil, the “Queen of Heaven” in early Sumeria. Lilith is a priestess of the sacred and holy sexual temple rites, who gives healing through her sexual powers. In the Goddess Cultures of ancient times, this was accepted as only sacred and holy. Lilith was seen as the maiden, or virgin aspect of the Triple Goddess.

Between 3000 BCE and 2500 BCE, the ancient Sumerian culture began its integration into the patriarchal views and ways, thus defiling the sacredness the Goddess offered to all people. The inner temple, sexual love healing was one of the first and most important desecrations the patriarchy imparted to conquer the Goddess and to distort and make evil the Divine Feminine.

The Goddess and all the powers of Woman were oppressed which include intuition, sexual healing, sacred temple priestess rites to lead and guide the people, the power of the heart rather than the head, and the sacredness of the body as the temple to name a few. They were sent into the shadows, feared and demonized. Women, and the feminine aspect within men, were pushed underneath the male, linear, conquering, power-over way of being.

In Jewish folklore from the 8th-10th century, Lilith is said to be Adam’s first wife, born of the same earth as Adam (not from his side as was Eve.) She was born of equal ground, and given equal rights by God. When she wanted that equality expressed in every way, particularly the ancient sacred sexual ways, Adam said no and wanted his patriarchal dominion. Lilith knew her core power and essence, and called God forth, demanding he release her from this union and allow her to have her way in the world. She then grew wings and talons and flew away, to live her life unfettered by the lack of cooperation, respect and dominance Adam wanted to have for her.

As time passed and the patriarchal influences reigned on, the stories of Lilith grew more grotesque and more demonizing. Her original maiden gifts were the healing powers of her own sacred body and sensuality. She, as each of the priestesses of the holy temples of the goddess Innana, were the embodiment of the Goddess, of love, of pleasure, of purity and healing centered in the heart of the Goddess.

It is no wonder women have been culturally imprinted for thousands of years to be less than equal men, to take a place of subservience, to be outcast with her menses, and to be denied of love of her own body and sexuality.

We are now in a time of restoration of the Divine Feminine, of returning to balance, and to reclaiming our sexuality, our sensuality, our sacred bodies as temples, and our essence as that which is only Divine.

Invoke the Power of Lilith into Your Life

If you have been drawn to Lilith today, whether you are male or female, may you call upon her courage, passion and power to be yourself. Invoke her presence by calling her sacred Name, and invite her into your heart and your life for major transformation to align with your essence. She understands and has the ability to fly away from injustice, to summon forth the power of the heavens for freedom of her true essence. Let her wisdom of holy and sacred rites come into your body, to honor it, as well as your voice, that you may give to all of yourself in a sacred life.